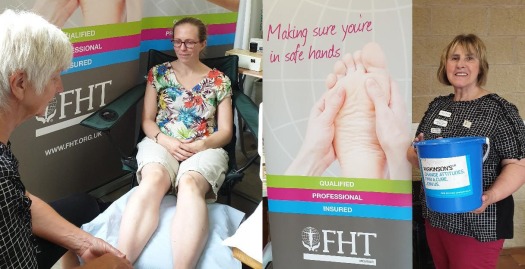 As well as offering taster sessions in reflexology and chair massage to show competitors and the general public, they raised funds for Parkinson’s UK, specifically for the Telford and Wrekin Support Group. Since attending this type of event Jacquelene and Janet have raised more than £1,000 for the charity.

Parkinson’s UK has been their company’s chosen charity for many years, as they are the Telford and Wrekin Support Group’s ‘resident therapists’, providing group members access to different complementary therapies and the Healthy-Steps Exercise Programme.

“The FHT banners we hired were perfect for raising the profile of the FHT and helped to draw in the crowds to the stand, from warming up the show jumping competitors’ muscles, to helping relieve tension in the legs of those walking around the shows for hours,” says Jacquelene. “Regular clients returned and new ones enjoyed the benefits of holisitc therapies.”

Both events were well supported by the general public and the fine weather contributed to their overall success.